Murano is a municipality in the Veneto, and it’s the last island of the upper lagoon. Murano (Amurianas, Amurianum), a very important island for its glass industries, already populated at the time of the barbarian invasions, was named by a door of the destroyed town of Altino or, as some other wrote, it was named after the most famous Muranesi and Muriani families which here took refuge. 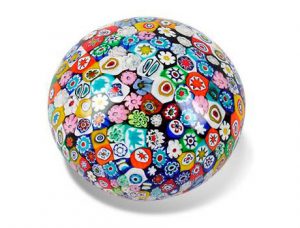 In Murano, the main source of prosperity, wealth and fame was the art of glass. The most savvy laws of the Greater Council (1291-1295), which removed all the glass factories from the Doges’ art city, concentrated them in Murano, where some of them already existed. The island reached the culmination of prosperity in the 15th and 16th centuries. During this time the population was 30,000, 17 churches, a beautiful basilica founded in the 7th century. It had countless palaces, colleges, schools, art academies, literary and scientific academies, had several daily opened shops, and hosted two annual public fairs, where the productions of the famous furnaces were sold. 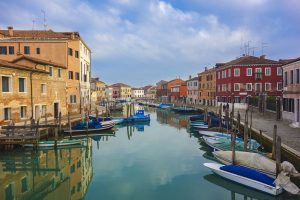 Murano’s topographic position and the whole configuration couldn’t be more beautiful and charming, and they are even the most appropriate for the maritime trade.
Inside, like in Venice, it’s divided by a deep water channel, that runs straight to the sea. Four smaller channels divide it into other islands joined by bridges. The tourist visiting this island of majestic past will be sensitive, and if he is open minded and kind-hearted he will be amazed, and he will exult and cry with us, so we will be eternally grateful and wishing him all the best.

The Murano furnaces since 1200 give life to the masterpieces of the glassmasters who shut themselves on the island to defend the secrets of their production, had succeeded in creating such a clear and pure glass that it became it incomparable on the international markets.

“Meanwhile, the work of the furnace was proceeding fervently. At the end of the blowing irons, the molten glass swelled, twisted, became silvery as a little cloud, shone like the moon, crackled, divided into a thousand infinitely fine fragments, glittering, slighter than the threads which we see in the forest at dawn stretching from branch to branch, The workmen were shaping harmoniuous vases, each as he operated obeying a rhythm of his own, generated by the quality of the matter and by the habit of movements most apt to dominate it. The apprentices would place a small pear-shaped mass of burning paste on the spot pointed out by the master, and the mass would lengthem out, twist, transform itselft into a handle, a rim, a spout, a foot, or a stem. The red heat would slowly die out under the instruments, and the half-formed chalice would again be exposed to the flame and be drawn from it docile, ductile, sensitive to the slighest touches that adoned and refined it, conforming it to the model hande down by their fathers, or to the free invention of the new creator. The human gestures round those elegant creatures of fire, breath and iron, wew extraordinarily nimble and light, like hthe gestures of a silent dance.”

The Basilica of SS. Mary and Donato

It’s one of the most important Byzantine mixes to Arabic monuments of the maritime Venice; this Basilica, mainly due to the characteristic of the external apse, is considered the a unique monument present in Italy today.

This church, to which to a monastery of Dominicans was annexed, was rebuilt in larger dimensions thanks to the alms of the islanders, and it got its fulfillment in 1509.

Geneva, the only daughter of Mario Gradenigo, in 1187, donated a land with some waters adjacent to Giacomina Boncio, daughter of Antonio, who lived in Santa Maria di Murano, in order to build a church and a monastery in honor of the Virgin and Blessed Apostle Jacopo, and with some other pious women, professing regular discipline, served to God. So the monastery and the church of Santa Maria degli Angeli was born.

City Hall,  seat of the Museum

It is one of the few magnificent palaces in Murano. It was originally purchased by Marco Giustinian, bishop of Torcello, who in 1659, due to the unhelthyness of  Torcello island, moved his residence here.